Shaun Ryder (born Shaun William Ryder on August 23, 1962, in Little Hulton, Greater Manchester) is an English singer and songwriter who became famous in the "Madchester" era band Happy Mondays, and later Black Grape in the mid-1990s. His lyrics, dismissed by some as drug induced gibberish, also received critical praise for their wit and musical fusion with the sound of the band. Ryder's struggle with drugs eventually led to the break up of the Mondays in 1993. 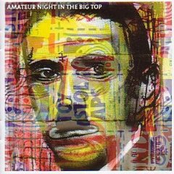 Amateur Night in the Big Top