Press info: Mondo Fumatore, hailing from Berlin, Germany, this trio originally started back in 1998 with a rave reviewed album on Rewika Records. Since the drummer left the band pretty much after the first tour, they went on as a duo and started to digitalize their kind of fuzzy indierock sound (ranging from Beck to Sebadoh, but also from The Beatles to Jon Spencer Blues Explosion (the garage years) from album to album. Discography: “Rolling like an egg” CD, Rewika Records (1998) 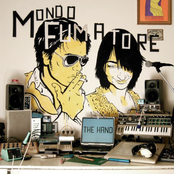