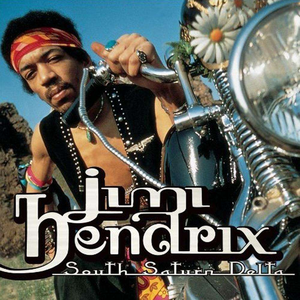 It’s an intelligently sequenced, listenable collection of some of the very best outtakes and rarities from Hendrix, and is another sign that Experience Hendrix LLC’s restoration of Jimi’scatalog will be smart, stylish, and logical. - Stephen Thomas Erlewine/AMG - South Saturn Delta is a posthumous Jimi Hendrix album compiled by the Hendrix estate that consists of material such as demo tapes, unfinished takes and alternate mixes, previously released material, most of which Hendrix had been working on prior to his death in 1970. When the Hendrix family acquired the rights for Jimi’s catalog in 1995, they signed a contract with MCA Records (predecessor to the Universal Music Group) to release compilations of rare or newly discovered material. The first album that resulted of this contract was First Rays of the New Rising Sun, which was released in 1997 and was an attempt to rebuild the album left unfinished at Hendrix’s death. South Saturn Delta followed it some months later and is a collection of unreleased material. It is planned to be re-released by the Hendrix Family in a special CD/DVD digipak package on April 12, 2011. The track list includes tracks from out-of-print albums such as Rainbow Bridge (“Look Over Yonder”, “Pali Gap”); War Heroes (“Bleeding Heart”, “Tax Free”, “Midnight”); and Loose Ends (“The Stars That Play with Laughing Sam’s Dice”, “Drifter’s Escape”) along with new mixes of songs (“All Along the Watchtower”). “Look Over Yonder” is an outtake from 1968 featuring the original Experience line-up. The incorrectly tagged “Little Wing” is a demo tape performed solely by Hendrix and Mitch Mitchell and musically identical to “Angel”. “Here He Comes (Lover Man)” is a well known Hendrix concert staple song that never made it to any of his albums. “South Saturn Delta” is a horn-laden funk-jazz song while “Power of Soul” and “Message to the Universe (Message to Love)” are studio versions of two Band of Gypsys tracks, the latter performed by Hendrix’s Woodstock band Gypsy Sun and Rainbows. “Tax Free” is a studio recording of the song written by the Swedish instrumental duo Hansson and Carlsson, occasionally played on stage by Hendrix. “All Along the Watchtower” is the same take that appears on the Electric Ladyland album, but this one is the earlier mix by Chas Chandler. The stereo mix of “The Stars That Play with Laughing Sam’s Dice” (originally the B-side to “Burning of the Midnight Lamp”) is taken from the Loose Ends album, which was released in 1974 in Europe and Japan. “Midnight” is an instrumental song from the Electric Ladyland sessions. “Sweet Angel” is an early demo version of the song “Angel” featuring Hendrix using a primitive drum machine (the original tape had become slightly damaged some years back, although suspiciously, the same version remains intact on the 2000 The Jimi Hendrix Experience box set). “Bleeding Heart” is a jam based on an old blues song that appeared in 1972 on War Heroes and in 1994 on Blues. “Pali Gap” is an instrumental. “Drifter’s Escape” is a Bob Dylan cover that also appeared on Loose Ends. “Midnight Lightning” is a demo tape of Hendrix’s delta blues song featuring Hendrix alone tapping his foot to keep time while playing. Tracklisting A1 Look Over Yonder 3:25 A2 Little Wing (Angel) 2:44 A3 Here He Comes (Lover Man) 6:33 A4 South Saturn Delta 4:07 Percussion – Larry Faucette B1 Power Of Soul 5:20 B2 Message To The Universe (Message To Love) 6:18 Guitar [Rhythm] – Larry Lee B3 Tax Free 4:56 C1 All Along The Watchtower 4:01 Percussion – Brian Jones, Jerry Velez, Juma Sultan Guitar [Twelve-string] – Dave Mason C2 The Stars That Play With Laughing Sam’s Dice 4:21 C3 Midnight 5:32 C4 Sweet Angel (Angel) 3:55 D1 Bleeding Heart (Peoples, Peoples, Peoples) 3:15 D2 Pali Gap 5:08 Percussion – Juma Sultan D3 Drifter’s Escape 3:05 Percussion – Juma Sultan D4 Midnight Lightning 3:07 ‘ Credits Engineer – Angel Balestier (tracks: A1, A3), Bob Hughes (tracks: B1), Eddie Kramer (tracks: A2, A4, B1 to C1, C3 to D3), Gary Kellgren (tracks: C2), Jack Adams (tracks: D1, D4) Producer – Chas Chandler (tracks: A2, B3 to C2, C4), Jimi Hendrix (tracks: A1, A3 to B2, C3, D1 to D4) ‘ Notes 2011 – 180 Gram Audiophile Pressing on 2 LPs in a gatefold sleeve. This compilation assembles recordings from throughout Jimi Hendrix’s career including both incarnations of The Experience, Woodstock’s Gypsy Sun & Rainbows and the Band Of Gypsys. Features early renditions and alternate takes of the classics “Little Wing,” “Pali Gap,” “All Along The Watchtower,” plus previously unheard recordings such as “South Saturn Delta”. User-contributed text is available under the Creative Commons By-SA License; additional terms may apply.