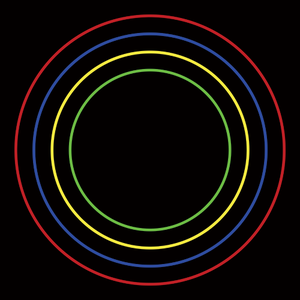 Four is the fourth studio album by British indie rock band Bloc Party. It was recorded in late 2011 and early 2012 at Stratosphere Sound, New York City, with producer Alex Newport. Newport also produced Wreckonomics—the EP of bassist Gordon Moakes' side project, Young Legionnaire. It was released on 20 August 2012 on independent label Frenchkiss Records, and was made available to stream the week preceding its release. The album peaked at number 3 in the UK Albums Chart, and at number 36 on the Billboard 200 chart in the United States. It is the last album featuring the original line-up with Gordon Moakes and Matt Tong. Despite four years of hiatus making this the largest gap between album releases, the band recorded the album using a more guitar-oriented sound, reminiscent of their debut album, Silent Alarm. Origins and recording: Following the release of electronic music-inspired third album Intimacy in 2008 and single "One More Chance" the following year, Bloc Party went on an indefinite hiatus as their contract with Wichita came to an end. During the break, members of the band continued with various side projects; lead guitarist Russell Lissack returned to Pin Me Down and joined Ash for a number of live dates, multi-instrumentalist Gordon Moakes formed Young Legionnaire, and frontman Kele Okereke released debut solo album The Boxer. During this period, rumours spread about the future of the band; in interviews with NME, Okereke said he feared being "fired", and Lissack later implied the band were seeking a new vocalist. Rumours of a reunion were fuelled by a Christmas photograph circulated on Twitter showing all four members of the band together, and four months later Lissack confirmed the group's intention to record a new album. Four was recorded between winter 2011 and spring 2012 at Stratosphere Sound in New York City. The idea to record in New York with producer Alex Newport came about after Okereke and drummer Matt Tong relocated to Manhattan. Initially the band rehearsed material then recorded it soon after. Okereke told BBC 1 presenter Zane Lowe that recording of the rehearsed material added to the album's live sound and that the album itself was mainly recorded live with very few takes. Content: Although many of the songs were written in studio in rehearsal sessions, some songs, such as the album's opener "So He Begins to Lie", were written prior to recording, after an idea from guitarist Russell Lissack. Other songs, such as the lead single " Octopus" came about from Lissack's experimentation with effects pedals and loops. Okereke, who wrote all of the album's lyrics, based songs on a wide range of issues. "Team A" is said to be based on the New York drug scene, and "V.A.L.I.S." based on the science fiction novel of the same name by Philip K. Dick. Other songs, such as "So He Begins to Lie", were based on reality television. Critical response: Four received "generally favourable reviews" from critics; at Metacritic, which assigns a normalised rating out of 100 to reviews from mainstream critics, the album received an average score of 68 based on 34 reviews. The Observer's Phil Mongrendien has praised the album's "urgency" and said it bears "the sound of a band rediscovering what made them so special in the first place" While criticising the "hesitant and unpolished" slower tracks, a review by Jaime Gill on the BBC Music website remarked that Bloc Party now sound "full of potential where just four years ago they sounded depleted" and touted the record as "2012's most exciting guitar album". However, the album also received mixed reviews. Ian Cohen from Pitchfork was more critical, however, criticising what he calls a "revisionist history" attempt to move back to a guitar-focused sound, and saying that the band "don't have the physical stamina to properly recreate Silent Alarm." Marc Burrows of Drowned In Sound felt the record lacked "instant classics" but was "considerably more consistent, and consistently enjoyable... than either of its predecessors". Writing for The Quietus, Matthew Foster said that while the record is "laced with some of the band's hands-down strongest work", citing "The Healing" and "Truth" as examples, the louder tracks such as "Kettling" suffer from what he called a "reliance on the insta-drama of shredding and shrieking". Under the Radar pointed a certain "nonchalance" and suggested that "the album is never really able to build its momentum". Yet, Selena Fragassi noted that the single "Octopus" stood out for guitarist Russell Lissack's work. User-contributed text is available under the Creative Commons By-SA License; additional terms may apply.