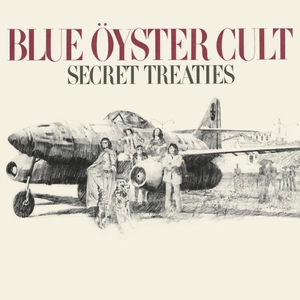 Originally released April 1974, Secret Treaties is a classic hard rock album that was unquestionably the peak of the first stage of Blue Öyster Cult's career. For many fans this means the best BÖC album ever. As an album, Secret Treaties could be compared to Radiohead's OK Computer, where the musicians, and even the production team, were the same as the two albums before it. Secret Treaties was exponentially more ambitious and better executed than what the band had tried before. Killer production, dense but impeccable song structures, complex but elegant arrangements for the instruments and vocals, a willingness to push the rhythms section beyond typical hard rock beats and downright freaky lyrics (Harvester of Eyes) make Secret Treaties one of the 70's landmark hard rock albums. Their next album, Agents of Fortune had the breakthrough megahit, the cowbell classic, Don't Fear The Reaper, Patti Smith who contributed to BÖC lyrics went on to become an icon and Sandy Pearlman went on to produce the best albums of The Clash, but for many fans this release represents the band at their peak. User-contributed text is available under the Creative Commons By-SA License; additional terms may apply.