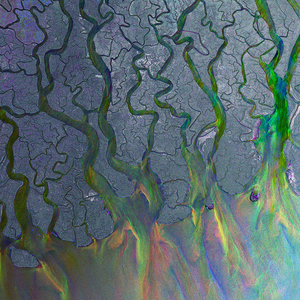 Named after the keystroke for making a delta (i.e., triangle) sign on a Mac by holding down the Alt and J keys, the Leeds, England–based trio Alt-J is inspired by the symbol’s mathematical definition of change. This makes sense upon hearing the band’s handsome 2012 debut album, An Awesome Wave. Its take on postmodern pop mines the best elements from folk-rock, garage rock, dub-pop, indie rock, vintage cinema scores, and a cappella harmony before constructing layered, angular arrangements with sonic ore. Following a dramatic piano part, the opening “Intro” weaves heavily reverberated baritone guitar leads (à la Ennio Morricone) over and around looped beats and random vocal samples that all come together to play like the sons of The Beta Band. These contrast the pointed, geometric arrangements of “Tessellate” with Joe Newman’s flowing, throaty vocals and backing harmonies, which hover above the music like those of Fleet Foxes. Then, in “Breezeblocks”—a mechanically grooving standout in which a toy piano provides the lead—he inflects like Devendra Banhart imitating Jason Mraz, with overt affectation. “Hand Made” closes with folky minimalism. User-contributed text is available under the Creative Commons By-SA License; additional terms may apply.