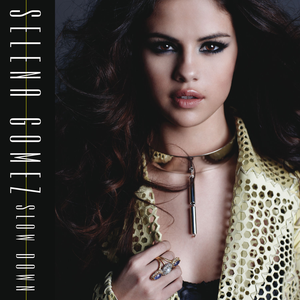 "Slow Down" is a song by American recording artist Selena Gomez, taken from her debut solo studio album, Stars Dance (2013). It was released on June 3, 2013, when it was made available for instant digital download along with the pre-order of the album. Hollywood Records later sent the song to mainstream radio as the second and final single from the album on August 13. The dance-pop song was produced by The Cataracs and David Kuncio, and infuses EDM elements in its instrumentation. Lyrically, the song speaks of slowing down time and living in one, magical moment on the dance floor. Music critics gave a mixed reception to the song, with some praising its catchiness and fun production, while others criticized the EDM influence. "Slow Down" has achieved moderate success, reaching number 2 in Belgium (Flanders), while peaking inside the top 20 in Belgium (Wallonia), Russia, and South Korea. In the United States, the song peaked at number 27 on the Billboard Hot 100, reached number-one on Billboard's Hot Dance Club Songs chart, and it has been certified Platinum by the Recording Industry Association of America (RIAA) for selling over 1,000,000 units of the single in the country. On the Mainstream Top 40 airplay chart, it reached the position of number 7. The accompanying music video for "Slow Down" was directed by Philip Andelman and filmed in Paris, France. It features Gomez singing along to the track inside of a car, partying in a nightclub, and strutting down the streets of the city. The singer has performed "Slow Down" in a number of live appearances, including on Good Morning America, The Tonight Show with Jay Leno, Late Show with David Letterman, and UK TV show Surprise, Surprise. It was also performed as the encore of her Stars Dance Tour. User-contributed text is available under the Creative Commons By-SA License; additional terms may apply.